“Quirky, inquisitive and endearing, raising alpacas is as close as I will ever get to having my own magical unicorns.”The alpaca is a species of South American camelid descended from the vicuña. This little ruminant is similar to, and often confused with, the llama. However, alpacas are noticeably smaller than llamas.

In America, this easy-to-care-for livestock is raised for it’s wonderfully sturdy and versatile fleece, also called “fiber”. There are two kinds of alpacas, the suri (pronounced: SOO-ree) alpaca, which sports long, silky, curly locks, and the huacaya (pronounced: wah-KY-ah) alpaca, which grows a thick, teddy-bear-like fleece. The fiber from both species of alpaca is used to make clothing, fiber arts, blankets, rugs hats and more.

Because alpaca fiber is hollow, it is both lighter and warmer than sheep’s wool and it is even water-repellent! It also lacks the lanolin coating of sheep’s wool, making it a great alternative for people with wool allergies.

“Quirky, inquisitive and endearing, raising alpacas is as close as I will ever get to having my own magical unicorns.”

There is something fun for everyone here on the ranch. Alpaca yoga, painting with alpacas, holiday events & more. These are just a few of the events we have planned. Keep an eye on our event calendar to learn more.

Looking for something fun and unique to do with your family? We offer farm tours twice a week, where you can learn about these unique creatures and have a hands-on experience. You can even feed them if you want.

Thinking of planting a garden this year? Alpaca beans are a nutrient-rich, weed-free soil conditioner that improves soil quality and its ability to retain water. It is even gentle enough to put directly on young plants. Gardeners love it!

As we continue to grow, we will need volunteers who are interested in helping with various tasks & events at the ranch, including, but not limited to:

Since we are just getting started, these volunteer opportunities will evolve.

Alpaca of the Month 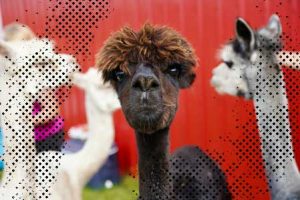 Fudge is one of the silly alpacas in the girl’s herd. Even though she is 16, she will jump around like a cria when she gets excited, which is pretty cute to watch. Fudge is not shy and is one of the first ones that come to eat out of a guest’s bowl during farm tours.

Fun Fact: When Fudge is a little anxious, she gets kissing and spitting mixed up. Maybe its because she’s a Gemini. Thankfully farm guests never make her anxious. I am the one she reserves her confusion for. It usually happens during shearing or vet visits. If I am lucky and she chooses to kiss, she will kiss over and over again. I keep baby wipes handy for the times she chooses to spit instead.